It’s always a bunch of work to look these up. Here’s a quick list of Lace Sensor versions, colors and specifications!

Measurement Variation:  Recently a Blue one was 12.6 (close) and a Purple one was 9.6K (whoa) so another purple one was off also. The Emerald can be lower as well, as far as down to 5.2K.  I’m not sure why so much variation but…hey..I didn’t wind these and I still like em!  So the measurements give you all ball park. Note that sonic ally they still match up and FENDER variations on pickups can be 10% at times.

Best of the bunch: Hot Gold, Silver and Blue. – Silver is a MUST HAVE.

Other Notes: Gold doesn’t play well with some of the others it’s rather low output but it has it’s place.  Red a very warm with less treble and likely wants a higher pot and doesn’t blend well with other Lace Sensor. It works pretty well on a 12 string bridge however 😉

Is it possible to get a lace sensor tone without the lace sensor pickups on a Fender standard strat?

I currently have lace sensors that I put into my strat about 6 months ago, the classic blue-silver-red combo that many 90's Stratocaster deluxe's had. So trust me when I say that there is absolutely nothing you can do to make ordinary pickups sound like lace sensors. I tried pickup height, string action, string tension/bridge adjustment, equalisation...anything I could to sound more like I had lace sensors and nothing works. Nothing works because lace sensor pickups sound the way they do because of their compressed electromagnetic field which adds dynamics and tones that can't be obtained by any other pickups! Your best bet is to just buy some.

The History of Lace Pickups

In the late sixties, soon-to-be company founder Don Lace Sr. first came into contact with the guitar industry. Lace Sr. was working with the then-budding Fender, assisting them with amplifier speaker issues. After setting up his own company in 1979 (dubbed Actodyne General International), Lace Sr. began research and development into his own unique pickup designs.

The business initially began in the humble family garage and consisted of Don Lace Sr. and his two sons, Don Lace Jr. and Jeff Lace. At the time, Lace Sr. was in contact with Fender’s pickup manufacturers, and readily learned about the nuanced ins and outs of the magnetic pickup. Their discussions led Lace Sr. on a journey to create his own version of the single coil. He planned to integrate the best features of both active and passive pickups into one singular unit.

After years of experimentation, Lace Sr. finally engineered a feasible method to put his plans into being. His first Lace Sensor pickup consisted of a true single coil surrounded by metal barriers. Similar to the metal claws on a Fender Jaguar pickup, these barriers reduced hum and focused the magnetic field beneath the strings, which in turn produced a punchier top and bottom end.

Lace Sr. then reengineered the pickup magnets to create a compression field around the coil itself, which further increased tonal harmonics and decreased electromagnetic interference.

The official birth of the first Lace Sensor pickup occurred in 1985 and was then used exclusively by Fender from 1987 to 1996. Initially, there were four varieties of Lace Sensors to choose from: gold, silver, red, and blue.

The gold strove to be as tonally authentic as possible, taking notes from glassy ‘50s single coils. The silver Lace Sensor emulated the beefy ‘70s Stratocaster scream, while the blue imitated a warm P90. The red variant held the most output and was designed to both feel and sound like a humbucker.

While Lace Sr. passed in 1992, his eternal spirit of innovation continues today through his two sons. The company have been constantly churning out new products that continue to push the boundaries of the traditional magnetic pickup.

Take their Alumitone single coils, for example. While all pickups are primarily voltage-driven, the Alumitone was created with a different goal in mind: to maximise its current. This is achieved by a water jet cut aluminium exoskeleton, paired with an extremely low number of turns – 90% less copper wire, to be exact. The low/high impedance pickup allows for more bass, volume and a slightly more pronounced midrange.

It’s an unfortunate truth that a large percentage of guitarists are purists, and would only touch a Stratocaster if the magnet poles were poking up through the covers. Thankfully, Lace’s Holy Grail pickups caters for this particular audience. Combining its hum-cancelling technology with a distinctly vintage ‘50s voicing, these pickups are a popular option for both stage and studio.

Lace has vastly increased both their reach and lineup of products over the years. Their patented single coil pickup is now available in a staggering nine variations – consumers are invariably spoiled for choice. The company is also currently working with Godin, National Reso-Phonic and a whole slew of other boutique manufacturers across the globe.

While Lace Pickups have already established themselves as a name synonymous with innovation, you can safely bet that they’ll always remain in the vanguard for the magnetic pickup’s inevitable evolution.

Lace Sensor Pickups are distributed in Australia via EGM Distribution.

The Lace Sensor is a guitar pickup designed by Don Lace and manufactured by AGI (Actodyne General International) since 1985.

This line of electric guitar pickups was used exclusively by Fender from 1987 to 1996.

Lace Sensors are true single coil pickups; however, internally they are different from classic single coils. The chief difference is that, like the pickups used on the Fender Jaguar, the coil is surrounded by metal barriers which are designed to reduce electro-magnetic interference such as power line hum. According to the manufacturer, these barriers also help concentrate the magnetic field, allowing weaker magnets to be used, which results in less string pull. Less string pull, in turn, means truer pitch and intonation, and superior sustain.

A Lace Sensor "Dually" is effectively a double coil unit combining two Lace Sensor single coil pickups in a humbucker configuration. The terminal leads of both pickup coils are accessible individually, so that they can be wired for a coil-splitting option or any other configuration.

These double coil Lace Sensors were used as a standard equipment material on the original Jeff Beck Stratocaster, the Telecaster Plus/Deluxe Plus and the Stratocaster Ultra, manufactured by Fender in the early '90s, as well on some Custom Shop models such as the Set Neck and Contemporary Stratocaster guitars.

Usually a humbucker needs to comprise at least two coils with equal output, in order to produce the noise-cancelling effect. Lace Sensors are able to use mismatched coils because both coils are already low in noise even if used as single coils.

Invented by Jeff Lace and introduced in 2007, Lace Alumitone pickups feature a new design which is aluminum based, rather than copper. The result is less resistance, higher output coupled to a "current driven design" as opposed to conventional voltage based pickups.

The water-jet-cut aluminum exoskeleton is then mated to a micro winding using 90% less fine copper wire. A low-impedance/high-performance pickup is then created. Due to this design, Alumitones can be produced into a variety of shapes and sizes. This makes it possible to fit Alumitones into almost any standard pickup or humbucker routing. Lace produces Alumitones for guitar, bass, pedal steel, extended range guitars and basses, cigar box guitars, and more. 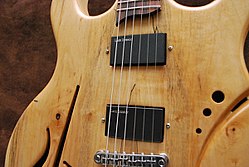 A Nitro-Hemi Lace Sensor on a hand-made Girouard Guitar.