FRANKFORT, Ky. (WKYT) - The Kentucky Supreme Court unanimously ordered the Franklin Circuit Court to dissolve an injunction that stopped new laws passed by the state legislature to be implemented.

Governor Andy Beshear filed a lawsuit in February after the legislature passed several laws limiting his executive powers. The Franklin Circuit Court issued an injunction on those laws.

“To take away tools that this governor needs is hurtful, frankly, to those of us who have lost friends and family to COVID,” said Colmon Elridge, Chair of the Kentucky Democratic Party.

The ruling allows the Republican-backed laws that limit Governor Andy Beshear’s emergency powers. Echoing similar sentiments from the governor’s office, Elridge said the governor was making life-saving decisions. And the ruling will prevent this at a time where cases are rising again.

“This has never been about politics for some of us, for most of us. It’s been about watching people that we love get sick,” Elridge said.

The full 34-page court decision can be read below.

Kentucky Auditor Mike Harmon issued a statement on the ruling. Harmon, who is running for governor in 2023, said “Today’s ruling by the Kentucky Supreme Court reaffirms the clear checks and balances that exist between the Executive and Legislative branches and how essential those are to prevent overreach by one side or the other.”

Like Attorney General Cameron said in a statement, Harmon says he also believes the governor should work with the General Assembly during the pandemic, further saying he doesn’t believe in mandates.

“I am glad to see today, that balance, at least for the moment, was restored,” said Harmon. “I understand his goal to try and save lives. But you have to weigh the pros and cons of all of it. People losing businesses, depression sets in, an increase in suicides.”

He went on to say the governor needs to communicate and work with members of the General Assembly.

A spokesperson for the governor released a statement in response to the ruling. In it, Crystal Staley said the Supreme Court’s ruling will dissolve Kentucky’s entire State of Emergency for the COVID-19 pandemic.

“It either eliminates or puts at risk large amounts of funding, steps we have taken to increase our health care capacity, expanded meals for children and families, measures to fight COVID-19 in long-term care facilities, worker’s compensation for front-line workers who contract COVID-19 as well as the ability to fight price gouging.” Staley said.

The governor’s office said the court has removed much of Beshear’s ability to make unpopular decisions in order to keep Kentuckians safe.

“If called in to a special session, we hope the General Assembly would do the right thing.” the statement said.

According to our news partners at the Herald-Leader, Attorney General Daniel Cameron, a Republican, said he hopes Beshear “will now consult with our General Assembly and find consensus on what is needed to protect Kentuckians.”

The court also ruled on a Scott County Circuit Court injunction that attempted to block Gov. Beshear from issuing further pandemic-related executive orders. It was vacated on the grounds that courts are “not empowered to enjoin possible future violations”.

Offers the most comprehensive rules volumes available in Kentucky. 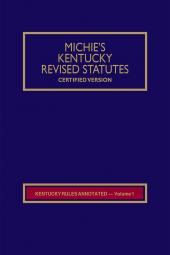 Subscribers receive the product(s) listed on the Order Form and any Updates made available during the annual subscription period. Shipping and handling fees are not included in the annual price.

Subscribers may cancel this subscription by: calling Customer Support at 800-833-9844; emailing [email protected]; or returning the invoice marked "CANCEL".

If subscribers cancel within 30 days after the product is ordered or received and return the product at their expense, then they will receive a full credit of the price for the annual subscription.

If subscribers cancel between 31 and 60 days after the invoice date and return the product at their expense, then they will receive a 5/6th credit of the price for the annual subscription. No credit will be given for cancellations more than 60 days after the invoice date. To receive any credit, subscriber must return all product(s) shipped during the year at their expense within the applicable cancellation period listed above.

Subscription are automatically renewed without any action on the subscriber's part

Under the automatic renewal option, at least 60 days before each renewal date, subscribers will receive a renewal notice, which include the cost of the next annual subscription. The renewal price will likely include a small increase over the prior year's subscription rate.

The total price includes the product(s) listed in the Order Form and any Updates for a limited period (minimum period of 30 days) after the order is placed ("Order Window"). Shipping and handling fees are not included in the grand total price.

All shipments may be returned, at subscribers' expense, for full credit of the Price within 30 days of receipt.

Shipments may not be returned, and no credits will be issued, more than 30 days after receipt.

After the Order Window, subscribers will receive notice of Updates along with the then-current grand total price and order process as Updates become available. Subscribers will only be shipped those Updates they specifically request.

If Subscriber selects the automatic Shipment Subscription program,they will receive and be billed for future updates without any action on their part.The total price includes the product(s) listed in the Order Form and any updates for a limited period(minimum period of 30 days) after order is placed ("Order Window").Shipping and handling fees are not include in the grand total price.

After Order Window,all Updates will be automatically shipped to subscriber with an invoice at the then-current grand total price on a semi annual or annual basis as the Updates become available.Subscriber can expect a price increase over the current retail price.The retail price does not and will not include shipping and handling.

Subscriber are advised of the number of updates that were made to the particular Publication the prior year.The number of Updates may vary due to developments in the law and other publishing issues,but Subscriber may use use this as a rough estimate of future shipments.Subscribers may call Customer Support at 800-833-9844 for additional information on update frequency and price.

All shipments may be returned, at subscribers expense, for full credit of the grand total price within 30 days of receipt.

Shipments may not be returned, and no credits will be issued, more than 30 days after receipt.

Return of a shipment, other than the initial purchase, will not cancel subscribers' subscription.

Subscribers' enrollment in the Automatic Subscription Program may be cancelled anytime by: returning the invoice marked "CANCEL SUBSCRIPTION"; calling Customer Support at 800-833-9844; or emailing [email protected]

View a sample of this title using the ReadNow feature

Michie's Kentucky Rules Annotated offers the most comprehensive rules volumes available in Kentucky, and now feature Local Rules of Practice and Procedure for selected Circuit, District and Family Courts throughout Kentucky. The court rules volumes contain complete case annotations, as well as extensive research references for all of the following rules:

Local Rules of Practice and Procedure for Circuit, District and Family Courts in Kentucky

eBooks, CDs, downloadable content, and software purchases are non-cancellable, nonrefundable and nonreturnable. Click here for more information about LexisNexis eBooks. The eBook versions of this title may feature links to Lexis+™ for further legal research options. A valid subscription to Lexis+™ is required to access this content.

Kentucky Rules of Civil Procedure, Rule 76.28 (4)(c)
Rule for citing unreported appellate decisions.
Opinions that are not to be published shall not be cited or used as binding precedent in any other case in any court of this state; however, unpublished Kentucky appellate decisions, rendered after January 1, 2003, may be cited for consideration by the court if there is no published opinion that would adequately address the issue before the court. Opinions cited for consideration by the court shall be set out as an unpublished decision in the filed document and a copy of the entire decision shall be tendered along with the document to the court and all parties to the action.